Check out the Miss Burlesque UK YouTube Channel for ALL the videos of the finalist’s and winners from 2018. 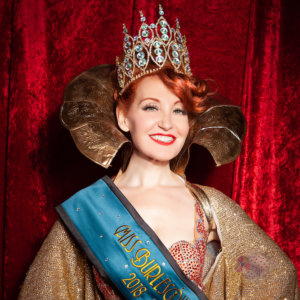 She met notorious vintage burlesque photographer Neil Kendall in 2001 while in Les Miserables at The Palace Theatre London, who quite unexpectedly ask her to pin-up model for him. After many fabulous adventures he encouraged her to take up the art of burlesque.

Eventually, took a chance on this wild and wonderful genre, though just for fun. Unbeknownst to her that this would end up being one of the best decisions in her stage career. Amber’s first performances were in early 2005 with the pioneers of the London burlesque revival, The Whoopee Club & The Lady Luck Club. Within a few months, Amber was touring in shows around Europe and producing sellout shows and club nights throughout London. As the burlesque resurgence grew she became as the headlining act of the International Theatre Tour ‘An Evening of Burlesque’. This was first burlesque show to grace the stage of The Savoy Theatre in Helsinki, Finland since Josephine Baker’s last performance there in the 1930’s!

Photographed by the legendary David Bailey for the Nokia Alive at Night exhibition, the photo eventually became part of his own personal Star Dust exhibition at The National Portrait Gallery London, along with headlining shows at the historic Blackpool Tower Ballroom.

Amber was the first artist to ever perform burlesque in Morocco. Amber has truly had a spectacular journey. Winner of the ‘Best Cabaret’ Award at The United Solo Festival New York 2018 with her self penned, critically acclaimed one-woman show, ‘The Rude Awakening, Sex, Shame & Liberation’. Representing Ireland in all her comedy glory won the Alternative Eurovision at the underbelly Festival London 2017. She was crowned Bohemian Queen of Burlesque in Prague 2016 by the one and only Dirty Martini. Amber Topaz also headlined and hosted the 2016 Perth Burlesque Festival in Australia and was Listed in Italian G.Q. Top burlesque artist in 2015.  She truly is ‘An Explosion of charisma and stage presence unmatched between music, song, comedy and seduction’. G.Q

Avdotia, whose name was inspired, by Russian ballerina Avdotia Istomina, is a natural on stage, born from a family of performers.  Dancing since the tender age of just 3 she discovered the world of burleque in 2010, with her first performance in Madame Jojos in Soho London.  Just like her names inspiration, she has poise and grace on stage, so breathtakingly beautiful, feminine and delicate in one moment.  Yet very versatile, as the next moment a powerhouse of passion and sex appeal, she uses her weapons of seduction to allure and entice.  This queen of tease leaves her audience addicted and longing for an encore.

Her endearing personality dazzles and sparkles even more than her bespoke devine Swarovski encrusted costumes.  She melts even the coldest of hearts with her scinitillating vixen looks paired with a heart of purest gold, she is stunningly beautiful inside and out and loved by all who meet her.

Avdotia is supremely skilled in many ways.  A choreographer, costume designer and creator, she takes great pride in her costumes and designs only using the best materials and boldly experimently with new and exciting techniques to add to her own flavour and zest to her varied repertoire of acts.